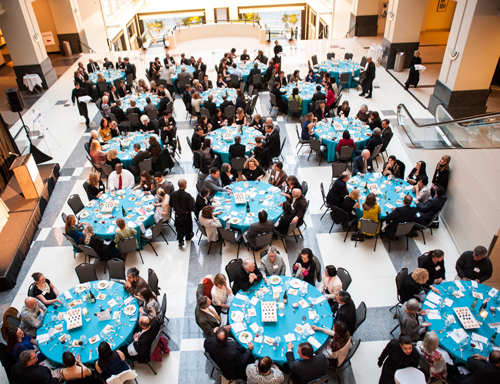 On April 5, 2014, 200 community partners and supporters joined Oregon College of Oriental Medicine (OCOM) at Montgomery Park for the 2014 Cherry Blossom Dinner and Awards. This second annual fundraising event honors the contributions of community leaders who are helping transform health care by advancing Chinese medicine, and raised more than $50,000 for 2014 the college’s annual fund.

Five community partners representing a diverse community of health care champions were honored at the dinner. The OCOM Alumni Association Scholarship was also awarded at the event.

2014 Community Partner in Healing Award
Kaiser Permanente
Since 2009, Kaiser Permanente’s Volunteer Gives fund has awarded OCOM a total of $60,000 to support expanding access to health care to low-income communities. Thanks to Kaiser’s support in 2009, 2011 and 2013, OCOM has been able to deliver $15 health care visits  to more than 500 low-income individuals in our intern teaching clinics. Their partnership has been instrumental in delivering much-needed care to a vulnerable population, and has supported OCOM clinics and students in providing accessible and effective health services to those who would otherwise be unable to afford care.

2014 Legacy Award
City of Portland and Portland Development Commission
Offered for the first time this year, the Legacy Award was presented to Portland Mayor Charlie Hales by OCOM Board President Peter Martin.This award recognized the City of Portland and Portland Development Commission (PDC) for their instrumental role in OCOM’s 2012 move to Old Town Chinatown. Thanks to their support, OCOM was able to meet a strategic  vision of relocating to the heart of Portland to ensure the long-term success of the college.

2014 Partner in Healing Award
Brad Malsin
OCOM President Dr. Michael Gaeta presented the 2014 Individual Partner in Healing Award to Dr. Malsin in gratitude for his unwavering support for OCOM’s relocation to Old Town Chinatown, and for his continued support for the mission of the college. Thanks to Malsin’s help, OCOM was able to double its educational space in a beautifully restored LEED Gold building designed to better serve students, faculty, staff and clinic patients. The impact of the new campus has allowed OCOM to develop important community partnerships to help advance and ensure the profession of Chinese medicine for the future.

2014 Scholar Award
Hong Jin
Dr. Joseph Coletto, the 2013 awardee, presented the Scholar Award to Dr. Hong Jin, OCOM Chair of Oriental Medicine. Jin was selected to receive the 2014 Scholar Award due to her visionary leadership over the last 21 years. Her work to advance Chinese medicine through exemplary teaching, national and international leadership roles, and innovative research has made substantial positive  contributions to the field of Chinese medicine, as well as to the college.

A leader in the regional, national and international health care community, Dr. Hong Jin is a 1985 graduate of Nanjing University of Traditional Chinese Medicine, and a 2007 graduate of OCOM’s Doctor of Acupuncture and Oriental Medicine (DAOM) program.

As a former board member and now as president, Howlett helped increase membership while providing exceptional advocacy leadership at the state level, resulting in expanded Oregon Health Plan acupuncture benefits and a recent legal victory in the “dry needling” case, among others. This award also honors her work as a leader at OCOM as both a faculty and staff member, which has resulted in substantial, long-term contributions to the college’s outreach and community-building efforts.

OCOM Alumni Association President, Lara Dilkes, also presented a $1,500 scholarship award to current OCOM master’s student Patrick Gazzini. Gazzini is a second-year student and Vice President of the OCOM Student Association. He has a background in athletics and exercise physiology, with a BA in biology from Villanova University, and a master’s degree in health and human performance from McNeese State University.

OCOM thanks the many supporters, friends and community partners who made the 2014 Cherry Blossom Dinner and Awards a great success.

Founded in 1983, Oregon College of Oriental Medicine (OCOM) is a nonprofit single-purpose professional graduate school offering master’s and doctoral degrees in acupuncture and Oriental medicine. Named the number one acupuncture college in 2012, OCOM’s mission is to transform health care by educating highly skilled and compassionate practitioners, providing exemplary patient care, and engaging in innovative research within a community of service and healing.

1. OCOM is ranked #1 Acupuncture School in the United States. We were also recently honored as the reader's choice for favorite holistic medicine school by Natural Awakenings, an award reflecting our commitment to excellence, innovation and a holistic student experience.

2. The college's strong alumni network of more than 1,300 graduates allows students to connect with practitioners across the country.

3. Our clinical education program provides the opportunity for students to practice in OCOM's clinics or one of our community clinics.

4. Oregon's focus on integrative medicine makes our Portland location an ideal place to study and collaborate.

7. As one of only two stand-alone AOM schools that have a funded research program, research literacy is infused into OCOM's curriculum.

8. Portland is a great place for study and balance. Our centrally located campus is within walking distance of more than 100 food carts, and miles of biking and walking trails along the Willamette River.

9. Our online Virtual Seminars are a great way to learn about OCOM from a distance. Better yet, come see the campus, get a tour, and receive a treatment at our next on-campus Admissions Seminar. Register today! 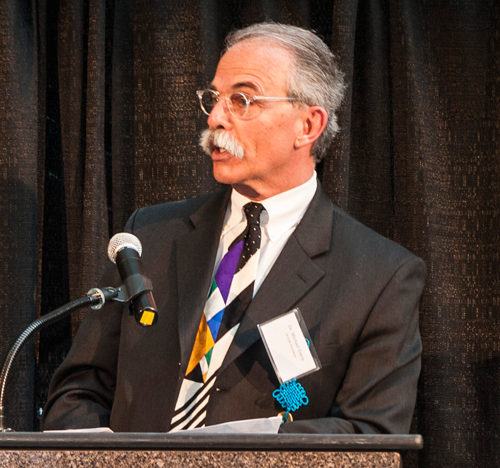 After serving as president of Oregon College of Oriental Medicine for nearly a decade, Dr. Michael Gaeta has announced his retirement, effective July 24, 2015.

“After much thought, reflection and careful consideration, I have decided to take the next step in my life,” said Dr. Gaeta. “OCOM has experienced steady growth and development as an institution of higher education, and I’m confident it will continue to flourish as a leader in our field. I look forward to my own opportunity to spend more time with family and to explore our world.”

Since arriving at the college in March 2005, Dr. Gaeta has overseen an impressive list of accomplishments, including:

“Dr. Gaeta’s work over the past nine years leaves the college poised for a strong future,” said Peter Martin, OCOM’s Board Chair. “His successor will take the helm of an institution with a state-of-the-art facility, increasing enrollment, and a stellar reputation in the acupuncture and Oriental medicine community.”

The college’s Board of Trustees has established a succession planning committee, which is working in close cooperation with Helen Smith, Chief of Staff, in a national search for OCOM’s next president. 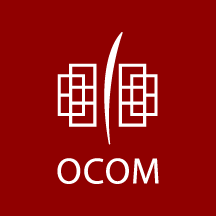 OCOM Clinic in Old Town Chinatown now offers acupuncture services each Saturday. The new Saturday hours, along with the Weekend Specialty Clinic once a month on Sundays, ensure that OCOM patients can receive treatment nearly every day of the month.

Both the clinic and the OCOM Herbal Medicinary will now be open each Saturday between 8:30 AM and 2:00 PM. All acupuncture services — including Group Acupuncture, which starts at $10 — are available on Saturdays.

“Over the past year, many of our patients have indicated an interest in weekend appointments. We hope that additional hours on Saturdays will serve patients who may not otherwise be able to make it in to the OCOM Clinic. An acupuncture treatment is a great way to relax into the weekend!” said Director of Clinical Operations, Miles Sledd.

The doctoral program’s Weekend Specialty Clinic is held one Sunday a month, and provides patients the opportunity to visit with a team of experienced clinicians focusing on specific conditions. The focus this fall is on women’s health, with clinic offerings on October 19, November 16 and December 14. View the Weekend Specialty Clinic schedule for 2014-2015.

For more information about OCOM's clinic, including hours and fees, visit our Clinics page. Contact the OCOM Clinic front desk at 503-445-0951 to schedule your appointment.

OCOM will award a $2,000 Golden Flower Scholarship to an incoming doctoral student for the 2015-2016 academic year.

Eligibility: To apply for the scholarship, you must be an applicant to the doctoral (DAOM) degree program for Fall 2015 and have completed your online Admissions application by 5:00 PM, November 21, 2014. Contact Judy Gjesdal, Director of Financial Aid for more information. 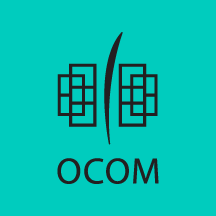 OCOM is happy to announce new scholarships for applicants to the next incoming class — Fall 2015 — for both our master's and doctoral studies programs.

Regional Awards — OCOM will award up to 20 regional awards of up to $10,000 each to incoming Fall 2015 students in the master's program who meet geographic residency requirements. View more information.

*All applicants are considered for merit-based scholarships in the application process. Contact the Office of Admissions with any questions: 503-253-3443 x175